It was a morning like any other in Goa. Lazy, languid, leisurely. But also not like any other, because we had planned a trip to Terekhol Fort (also called Fort Tiracol) – my husband, me, and our friend, Raju.

Raju was a biker. And since all three of us couldn’t possibly all fit on his dilapidated bike, we rented a car in Panjim for our long drive to the fort. It was early in the day, but I fortified myself for the drive with a peg of vodka and relaxed in the back seat, while the guys took over the tedious job of driving there.

Terekhol Fort is about 60 kilometers north of Panjim, on the top of a hill bordering the mouth of the Tiracol river. A ferry from Querim takes you across to the hillock. From there, it’s a short drive to the top. The sweeping, vertigo-inducing view of the Arabian sea from the fort is worth the drive there.

It was August, a month when riding a bike in the blinding rains would be madness. But we had a car. And windshield wipers. And a smidge of Smirnoff to keep our spirits up.

You could see the rain coming a mile away. A cloudburst, followed by a white wave that washed over the paddy fields and soaked the thirsty soil in its long-awaited beneficence.

The rains ebbed and flowed over us like the tide washing over the sand, as we drove on to Terekhol, dodging traffic on a road that was wide enough for no more than one and a half cars. Every time a bus came along, we had to drive off the road and wait until it passed by.

We were in a good mood, not least because of the little cocktail I’d imbibed before starting out. We listened to our favourite songs and laughed at stuff that only 20-something’s from before the millennial era would find funny.

We were now getting close to the Tiracol river and the ferry that would carry us to the hill on which the fort stood. Lush monsoon vegetation lined both sides of the road in a green hedge.

Ahead, a curious cow poked her head out of the bush. Not knowing the cow’s intentions, we slowed down instinctively. The head vanished and we sped up again.

The sound of breaking glass split the morning air like a crash of thunder. Our car had stopped dead in the road, and we were covered in cube-shaped pieces of glass. We were also missing a windshield.

The belligerent bovine, having committed its dastardly act, had hightailed it into the bush, seemingly unhurt, while we were left in the wake of its wavering departure, in mild shock and minus a windshield.

Whether it was the vodka or the shock, I’ll never know, but I took it all in quite torpidly, the way a slightly inebriated beach bum surveys the calm ocean in front of him.  I didn’t panic nor did I emit any sounds that communicated panic. Instead, I giggled (yep, it was the vodka).

None of us were injured, so we debated on what to do next and decided to carry on with our journey as if nothing had happened. Thanks to the cow that couldn’t decide where she wanted to go, our windscreen was shattered, but our resolve was not.

We reached the fort without further incident, parked the windshield-less car under a tree and covered it with a plastic sheet to keep the rain out.

After enjoying the sunset from a unique vantage point and spending a pleasant night at the Fort Tiracol Heritage Hotel, we drove back to Panjim, stopping under trees and holding up the plastic sheet over our windshield-less car every time the rains threatened to flood it and soak us inside.

We put in a new windshield at an auto repair shop before returning the car to the rental agency. I continue to live in perennial mistrust of cows, especially ones that can’t make up their minds, and beg my driver or companion to always give them the benefit of the doubt - and a wide berth.

I'm the Founder and CEO of BlogBrandz Digital LLP and the award-winning publisher of Naaree.com, a bestselling author, and online branding consultant. I help my clients... 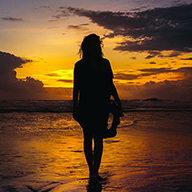 7 steps to transform your relationship with yourself

The rise of mompreneurs in India

The importance of pushing your business forward

The timeless charm of the Rann of Kutch