What does it take to be an impactful leader in the 21st century?

For far too long, we’ve been confusing leadership with followership and with pleasing people. The confusion begins early and goes on through all stages of life.

Whichever way you look at it, leadership is confused with pleasing and following. It might be time to recognise that:

To set the records straight, I’ve been conducting an experiment in 27 countries. I ask people what these leaders had in common, and from 11 behaviours, to choose the three biggest commonalities.

What do these famous leaders have in common:

Five of the 11 behaviours are consensus building, all-inclusive and democratic leadership behaviours, five are top-down (my way or the highway) behaviours, and one is a blend of both.

A mix of both:

Guess which ones are showing up as the top three commonalities in country after country in our experiment? Top-down!

Next, I ask respondents to indicate their level of agreement with the statement: In today’s age of breakneck speed, 24/7 connectivity and total transparency, a significant amount of top-down leadership is required to achieve breakthrough results; over 70% agree or strongly agree!

Agreement level – When it comes to achieving breakthrough success for the organisation, a significant amount of top down leadership is required

What this means is that while we claim to love pleasers, in fact we’ve always admired top-down, autocratic leadership. Our data is suggesting that Steve Jobs is perhaps not an anomaly – he may be the rule rather than the exception.

So where does this leave us? Does this mean we now have a 007 licence to kill, and can simply shoot anyone that doesn’t agree with us? No.What it does mean is that today’s age of uber-connectivity is empowering ordinary people like never before, so we cannot use force or position anymore. We need to earn the right to use top-down leadership.

Because, through their actions, they had each earned the right to use top-down leadership. Deep down, their people trusted them enough to listen to them despite their autocratic behaviour.  And none of them used excessive force or position power to enforce their will on people. In fact, Gandhi and Mandela never held positions of power for much of their lives.

So the question now is, how can the right to use top-down autocratic leadership be earned in an era where everyone is free and empowered in today’s 24/7 wired society, where position power is woefully inadequate, and where leaders stand naked in today’s age of total transparency?

To answer the question, we must first understand what leadership really is. We must stop equating it with a position or title, and with following or pleasing. Leadership does not begin with winning an election or with being appointed to a powerful position. It is not about replicating best practices either. What were Mandela, Gandhi and Lee Kuan Yew trying to do? They were trying to create a better future for their people. That is leadership, and it begins when one closes his eyes and vividly imagines and visualises the better future he wants to create for his people.

Of course, there is a huge problem with thinking about life and leadership in this way. Why? Because the moment you visualise a picture of a better future, you are ahead of everyone else, and your constant companion from then on, is resistance, resistance and more resistance. Pleasing would require you to give up on your dream and do what people say, but the key to great leadership is to not give up in the face of such resistance and keep going. So the main ingredient of leadership is not a competency, skill or personality trait, it is to stay the course.

Leadership Energy cannot be learned in business school classrooms through best practice case studies and theoretical models. It must be self-discovered by getting clear about two things – one’s values and purpose.

To uncover limitless energy, one must first become totally clear regarding the set of values that define his identity. Leadership Energy – the reason to act – is produced when one’s values intersect with day-to-day life. One must recognise these intersections and convert the energy into fearless purpose. 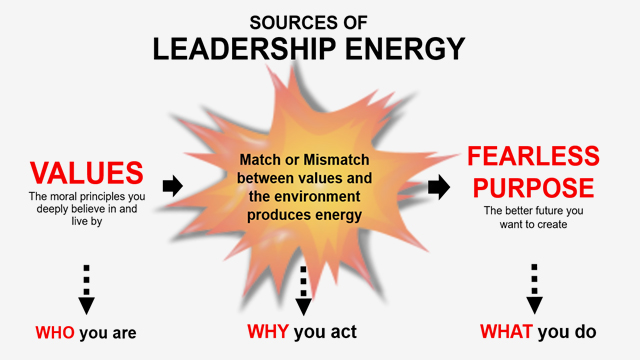 This is what Mahatma Gandhi did. He first became crystal clear about his values, which were humility, truth, equality and non-violence. He decided at a very early age that come what may, he would never compromise them. As he became deeply aware of his values, he began to recognise the anger he felt when he saw how people of colour were treated in South Africa, and how Indians were being treated in their own country. Ultimately, the anger became so immense that he converted it into a purpose – that of obtaining independence for India in a non-violent way.

Lee Kuan Yew said it best: If there is a good reason why it is ‘No,’ then it should remain ‘No,’ but the man must be told politely. You lose nothing by being polite.

This paradoxical duality (of autocracy and humility) is the unique quality that distinguishes the Gandhis, Mandelas and Lee Kuan Yews of the world from ruthless dictators like Stalin, Hitler and Idi Amin. 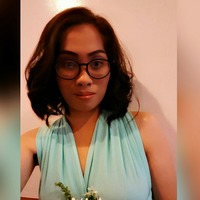 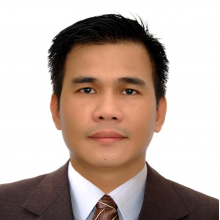 No such thing as bad leadership