The coming of age of Indian retail Summary: Indian retail has undergone a seismic shift in the last three decades. A trend that started with pioneers Pantaloon and Shoppers Stop has led to a radical shift in the way urban Indians experience retail - with many brands vying for a piece of the pie. Organised Indian retail is increasingly at par with global standards. Namrata Sachdev explains the transition.

Organised Indian retail is a relatively new sector, not over 30 years old with Pantaloon and Shoppers Stop being the pioneers in the business. Besides them, there were only a handful of early adopters in the first decade, a scenario that changed rapidly in the second decade. The late 90’s to 2008 saw a plethora of emerging retail brands in India. With apparel and fashion taking the lead, other lifestyle brands were not too far behind. With the economic wave’s upward crescent and disposable income on the rise, the burgeoning middle class was now spoiled for choice.

But in the midst of this massive expansion, a critical question to be asked was, ‘Was Indian retail at par with international retail?’ The answer was apparent with a walk down a high street or malls— the new flavour in organised Indian retail. Often greeted by straightjacketed mannequins with hanging arms and staid expressions, standing in a military formation in a cramped window. This was the face of the store and it couldn’t possibly compare with global retail. The latter being more than a century old whereas organised Indian retail was in its infancy.

Post 2008 the economic dynamics in the country saw a sea change. Hit by the global slowdown, the downturn saw many yet-to-be-profitable-brands faded into extinction. Consolidations, mergers, acquisitions and silent exits were the order of the day. Inflation was on a rise and GDP growth was at a measured pace. All this and more influenced the rise of a new government in 2014 who introduced ground shaking policies of demonetisation and GST.

The turbulence of the last decade has certainly seen many small players exit the scene but it also led to the emergence of stronger, more cohesive brands that weathered the storm.

In a heartening move, one now experiences organised Indian retail at more global standards. Perhaps Indian retailers have realised that to woo and wow the audience, they need to tell a story from the beginning. Defined product lines, well presented in collections, synergised deliveries across the chain of stores, world class branding, a detailed and layered retail store experience projecting the brand identity, last but not the least, topped with effective social media posts and engagement.

Today, brands fight hard to retain a customer, acknowledging that brand loyalty can’t be taken for granted. Indian brands have covered a greater distance in this last decade than the preceding one. What makes this achievement even more significant is that it has happened in a lesser favourable economic climate.

Other articles written by Namrata Sachdev 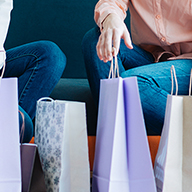 The art of visual merchandising to grow your sales